This is an oldie but goodie!  I (Taiga) was invited to spin for the AAJA’s (Asian American Journalists Association) inaugural Trivia Bowl at the ABC TV1 Studio in NYC where they currently film The Chew.  You can check out pictures and more tidbits from the event here.  Another fun fact… the space the Trivia Bowl was in used to be the set where they filmed the original “Who Wants To Be A Millionaire?” with good old Regis Philbin.  Anyways, thank you for your kind words AAJA! 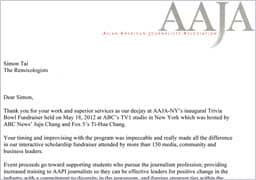 Thank you for your work and superior services as our deejay at AAJA-NY’s inaugural Trivia Bowl Fundraiser held on May 18, 2012 at ABC’s TV1 studio in New York which was hosted by ABC News’ Juju Chang and Fox 5’s Ti-Hua Chang.

Your timing and improvising with the program with impeccable and really made all the difference in our interactive scholarship fundraiser attended by more than 150 media, community, and business leaders.

Event proceeds go toward supporting students who pursue the journalism profession; providing increased training to AAPI journalists so they can be effective leaders for positive change in the industry with a commitment to diversity in the newsroom, and forging stronger ties within the AAPI communities.

AAJA New York is the organization’s largest chapter and has approximately 300 members.

Thank you again on behalf of AAJA-NY and we hope to work with you again in the future.